skip to main | skip to sidebar

I've crossed my first task off my to do list. The Khorne Lord on Juggernaut is built. 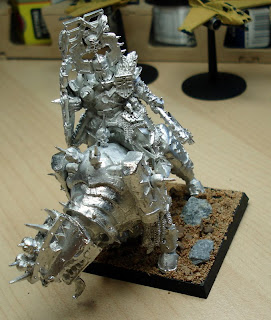 I just love the aesthetics of this model - it's a real Jes Goodwin classic. As soon as I saw it I knew I had to have it! Of course this year I made a New Year resolution not to buy any new models so I knew I'd have to wait until 2010. Lo and behold I open a birthday present from my girlfriend and I'm holding the model in my hand. Result! 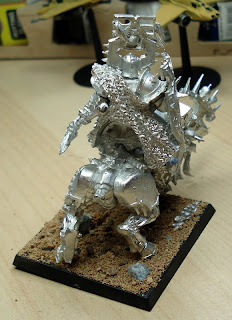 The only bad thing about the model is that it is all metal. Having come off the back of putting together the Ork Deff Dread, Killa Kanz and Meganobz I knew what a pain assembling metal models could be. This was no exception!

I think I must invented a dozen or more new swearwords as I tried to get the skulls on spikes stuck to the shoulders of the Jugger. 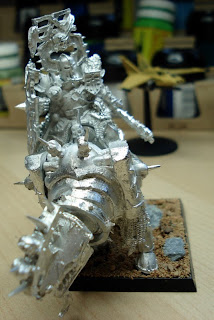 But why now? Good question.

I think it's because I've been listening to a lot of Warhammer Fantasy Battle podcasts lately (why are there no really good 40k podcasts out there?) and the Games Workshop tournament heats were played recently. I'd really like to return to my Warriors of Chaos army and finish painting the models and add a handful of new ones.

Having said that, I have now learned that WFB 8th edition is due out next summer. It makes sense then to hold off for a few months until the main rulebook is released.

At least I can show it to my girlfriend and she'll know her present was appreciated!
Posted by lone pilgrim at 2:46 AM No comments:

I have a day off work today and with my eBay auctions finished I can now concentrate on hitting my painting points target for the year. Priority is to finish off my Aeronautica Imperialis Imperial Navy wing (two Lightnings and two Marauders). Also on the workbench are dozens and dozens of Grots. If I get bored of painting I might put together my Khorne Lord on Juggernaught.

Expect a flurry of updates and photos throughout the day.
Posted by lone pilgrim at 12:36 AM No comments:

I'm done and dusted with eBay for the year.

I bunged a load of 2nd edition Ork models up for auction as well as a new Ghazghkull model. Everything exceeded my expectations and brought in far more than I had expected. Altogether I made £83.79.

I don't magnetise my models.

Many people do, nowadays. There are lots of tutorials on blogs and websites across the 'net showing you how to do it. There is one here on Mini Wargaming and a video here on Way of Saim-Hann. It's reasonably simple to do and doesn't cost much. In fact it saves you money in the long run.

The main reason for magnetising your model is to maximise your investment in the model; you can buy one Predator tank, for example, and fit it with heavy bolter sponsons, but then switch those out for lascannon sponsons without having to buy another tank. This also gives you greater tactical flexibility too, as you can tailor your army to your plan and opposition.

So it's easy to do, saves money and gives you a more competitive army. What's not to like?

The reason I don't magnetise my models is because I care about personality, theme and background.

I don't view models as just playing pieces in the game, but as part of a living breathing army in the 41st millennium. Those armies are defined by their weaknesses as much as their strengths.

A Predator tank in my Blood Angels army is not just a tank, it is Sacrum, a two century old vehicle which has fought in numerous campaigns. It is armed with an autocannon, heavy bolter sponsons and a pintle storm bolter. It earned it's name after it's first engagement against an Ork Waaagh. Leading from the front, it allowed several rhino troop transports to reach the Ork lines and despite being immobilised and drawing heavy fire, it spat a hail of death back into the greenskins. Without the sacrifice of that Predator, the Blood Angels may not have won the battle. Since then then, Sacrum has fought in countless battles, always utilising the same tactics, getting stuck in to the heart of the fighting and somehow surviving to fight another day.

Would it still be Sacrum if I swapped out the sponsons? I don't think so. It's the same with the weapons I choose for characters. Their weapons, wargear and armour become a defining part of them so I couldn't choose any others. It would seem like a betrayal!

I'd rather have the stones to pick the model as is, and try and make the tactics fit my force and the way my models are equipped. That might not be the 'best' choice for a game but at least you keep the background of your force pure and intact. I just think it's the start of a slippery slope switching between magnetised kit options. I don't want to start thinking of my models as just playing pieces. If I really want a certain combination I'll buy and paint a new model.

Besides, you never remember when your Predator with lascannons blows up an enemy vehicle because that's what you expect it to do, but you always remember when your Predator with heavy bolters does the same because the odds are against it. That would earn Sacrum a great honour, perhaps worthy of some extra painting on the model, a purity seal or maybe a write up in a battle report.

Anyway, it's often surprising how often I think I really need a particular combination of weapons only to find that I don't when I start playing the game. If after a few games it's clear I really do need a particular model or weapon then I build a specific model for that purpose. I will write up it's own history and then develop it further as I play some games with it.

I don't hate those who do magnetise their models, in fact I admire their ingenuity, but it's not for me.
Posted by lone pilgrim at 10:52 AM 6 comments:

You may notice below that I have rearranged my books wanted list. It was getting so long that I decided to split it into several sub-lists. I was also struggling to remember when to add books to the list; previously I would add then when the book was released but now I'm adding them as I hear about them - even if they are not published yet. This should ensure I don't forget about a book.

I have three books to tell you about.

The first is The Killing Ground. This is the fourth book in Graham McNeill's Ultramarines series. I'm afraid to say that this book creaks under the weight of the bonkers plot of the previous book.

I praised Dead Sky, Black Sun for it's ambition but I felt it had bitten off more than it could chew. The Killing Ground is also quite ambitious, dealing with terrorism and ruthless planetary governors. It has a very different feel from many other Black Library books which go for the cardboard cut-out stereotypes and clichéd plots. The basic premise of TKG does not allow the characters to have simple black and white moralities - here everyone is compromised to a greater or lesser degree. Like DSBS, I support Graham's aim and ambition but not it's execution.

The Unfleshed sub-plot was absolutely unbelievable - in a bad way. It was obvious they had to be dealt with somehow as Graham had written himself into a corner with them, but I just didn't buy into their journey. His Space Marine characters are also still too human. The whole book just didn't click or flow for me.

I'm afraid to say I want a more 'back to basics' kick ass Space Marine battle book from Graham next time around. Maybe Courage and Honour will get the Ultramarines back on track?

The second book I eagerly devoured was Imperial Armour VII: The Siege of Vraks part three. (Un)fortunately it's the same old stuff from Forge World - excellent art (I loved the maps of the Citadel in particular), great models, terrible writing. It's the very definition of a well polished turd.

If Forge World can hire professional artists to illustrate the books why can't they hire a professional writer to write the text? Imagine what Dan Abnett could have done with this source material? It's so frustrating. All the elements of a good story are there but they are frittered away in meaningless detail, or even ignored altogether.

The 'plot' is poor, with the named greater daemons in particular getting very short shrift. The final assault on the citadel had so much potential but was a damp squib.

I'd still buy it again, though. The inclusion of campaign rules, albeit brief, was a very welcome addition. All those lovely maps and models really make me want to develop my own campaign based upon the assault on the citadel. The IA books are an inspiration but they could still be improved upon.

The third book I've finished in time for this update is my Warriors of Chaos army book. I'm not used to reading Warhammer Fantasy battle army books - in fact when I last played the game there was no such thing! I found it had a good background section but it wasn't comprehensive - how could it be given the range and depth of Chaos history that has preceded it?

The art and maps were excellent. I personally don't mind black and white paintings and illustrations. They can be very evocative and moody, and I don't automatically think colour is best. The colour painting section is big and very inspirational. There is a big variation in models though - some desperately need updating (eg Dragon Ogres, Ogres, Trolls).

Things rapidly go downhill at this point in the book. The army list dreadful. Woeful. Awful.

That means WoC players can be easily manipulated by opponents with cheap redirecters and other chaff. Magic can help negate this but it means you end up with Wizards of Chaos trying to get off Infernal Gateway. All roads lead to Tzeentch spellcasters on Discs to give you mobility, using spells to give you a shooting phase.

It is not helped by the fact that the character wargear is poor, especially the lack of ward saves. You have to challenge other characters in combat but you will often be beaten by 'weaker' characters with superior wargear. There is absolutely no reason not to buy level four wizard to lead your army.

I'm not happy with the book at all but I will stick with it, as I don't want to get involved with lots of other Warhammer armies. I just hope that 8th edition helps rebalance the rules in 2010.

In order to motivate myself to paint I give each model a score based upon it's size.